It all started with the treasure map.

My friends from the Los Angeles Dumbledores Army (LADA) had been planning a trip to Portland to go to a Harry Potter convention.  I had never been to a con before so I decided to come along.  Secretly, though, it was more because I could finally fulfill a lifelong goal of going to Astoria, Oregon…. Goonies Country.

For many years prior, I’d been researching and planning the best way to get out to Astoria and visit the Goonies sites.  I’d planned road trips that never panned out for one reason or another and just never got to it.  But now was the time!  From the outset, I knew I was going to plan the adventure as I’d already had most of the research done.  I’d invited all of the LADA members to join me and three of them jumped on board.

During the planning stages for the trip, it morphed from a fun day trip into an epic adventure, and as I said,  it all started with the treasure map.  I was plotting out the different locations to visit when the idea came to me that I needed to make my very own treasure map with Goonies locations to visit.  From there I went whole hog – and this is how it went down.

I’d rented a car big enough for the four of us to be comfortable all day and decorated it with signs that said “One Eyed Lilly’s The Inferno II”.  I decided being ‘One Eyed Lilly’ would be extra fun since Lily was Harry Potters Moms name and added the extra ‘l’ for One Eyed Willy.  I hid the decorated car so hopefully my friends wouldn’t see it.  Then I set my bootie traps all around my hotel room and hid the treasure map.  I’d left a sign for the three Goonies to knock once all assembled early on the morning of the trip.  When they did,  I answered the door dressed up like a pirate, accent and all, and invited them in for a treasure hunt to find the map.  I had strategically placed a balloon and a thumb tack so as they opened the door to enter my room, they got a bit of a surprise, ahhahahahaaaaa! 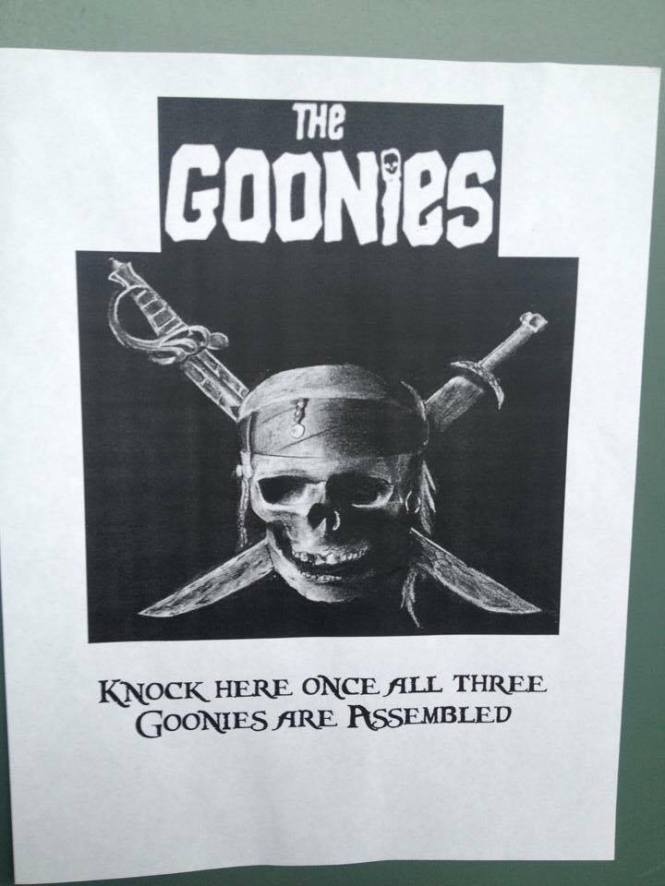 I then had them search the room – which was quite small.  One of them opened a door and found a DEAD PERSON HANGING IN THE CLOSET!   Or it could have been a paper skeleton from halloween… you decide.  Then they opened a drawer by the tv with a HUGE MAN EATING RAT INSIDE,  that might have plastic, whatever.  Finally I’d hinted I’d hid the map behind a modern portrait and eventually they figured out it was rolled up behind the TV.  We checked out the map and then everyone got a Goonies themed name tag, we recited the Goonies Oath and hit the road!  On the trip out – we did Goonies trivia – the winner of course getting Baby Ruth candy bars!

The trip through Oregon’s lush, green and gorgeous countryside with The Goonies soundtrack blasting is amazingly stunning.  Once in Astoria, we pulled over and consulted the map and decided to visit the most iconic location in Astoria: Mikey and Brand’s house.   We parked at the bottom of the hill up to the house and walked the rest of the way – and lets just say – as 4 proud members of the Oregon Trail Generation, this was our Mecca.  We spent about 15 minutes ogling and taking pictures and then more pictures and just before we left we posed for a few more pictures.  It was almost nostalgia overload – and the trip had barely begun!

After some coffee at the Astoria Coffee Co., we stopped at the school fields where Andy was at cheerleader practice.  Then we headed down to Lower Columbia Bowl to check out the infamous bowling alley where Chunk witnessed the police chase in the films opening credits.  The owners of the alley were seriously some of the nicest people I’ve ever met!  They were crazy patient with us and were super cool with us and showed us all of the locations they used.  They could be really bitter with all of the Goonies traffic that comes through, but they were awesome.  I only wish we’d worked in time in the day to bowl with them! 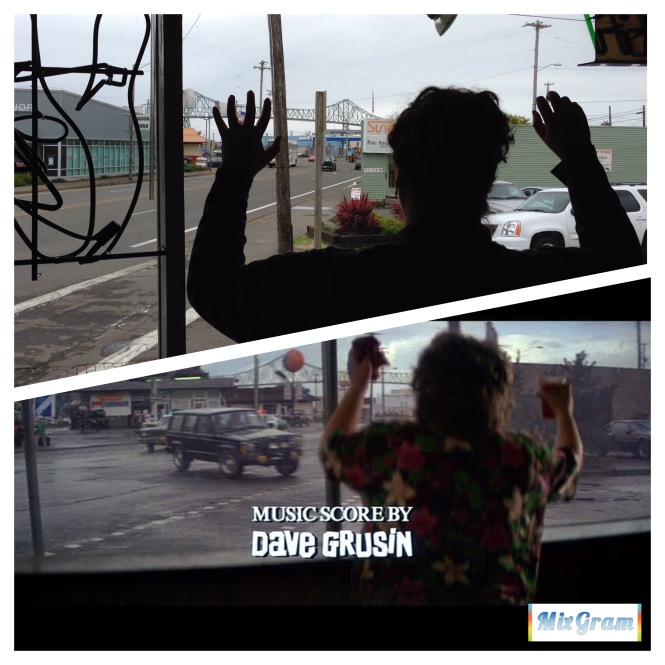 We then headed out to visit the Oregon Film Museum, which is actually inside the prison the Fratelli Brothers escape from in the film.  I’d say a good half of this museum is dedicated to The Goonies, however, more films than I realized actually filmed in the area and around Oregon and it’s definitely worth a visit.  We then had a delicious lunch at the Fort George Brew Pub before leaving Astoria to head out to Canon Beach, Oregon to visit the iconic Haystack Rock.

Getting on Canon Beach was a bit difficult as there was either a lack of public parking or I am a bad navigator.   Probably the latter, however eventually we got out on the beach.  We were there in June, but being Oregon the beach was pretty chilly for us Southern Californians.  Haystack rock was amazing to see up close and reminds me of my childhood not only because of The Goonies, but because it reminds me of my childhood camping memories in Morro Bay, California and Morro Rock.  Once we got enough pictures, we headed to Ecola State Park.  This is where the footage from before the kids go inside the Fratelli Restaurant takes place.  It’s got the view of the light house as well as the Haystack rock.

For me, Ecola State Park was my favorite location of the day.  I felt closest to my emotions for this film here.  Even though it’s just a simple treasure hunt kids movie, it hit me at exactly the right time in my life.  Don’t we all have those movies that stick with us in our hearts because we experienced them at the right time in our lives.  The Goonies is definitely one of mine along with seeing E.T. in the theaters when I was just 4 years old.  Basically,  I was younger sister Gertie’s age in the movie,  so E.T. still is one of those films that is a part of me.  The state park is also worth a visit for many other reasons – American history… Lewis and Clark… blah blah.  It’s just so beautiful and green and Oregon-y.

We had had a long day by now and headed back into Portland.  Most of my fellow Goonies took a nap in the back so I had a little time to reflect on a lifelong dream having come true.  Not everyone cares about movies like I do – so this post may not resonate with some readers.  However, you probably love something as much as I love traveling for my pop culture fandoms – so this is just another example of how easy it is to get up, get out and get gone – making your dreams come true.