The Amalfi Coast is one of those destinations that you dream about from a young age.  It’s so unbelievably picturesque, it’s almost hard to believe that it’s real.  However, it is very real and a relatively easy place to visit.  I throw that “relatively” in there because there are obvious challenges – such as steep mountains and the pesky truth that what goes down, must come up.  Throw in the fact that the roads between the towns are extremely narrow and Italians are confident daredevils and drive very fast and at times dangerously carefree,  and it’s a bit of a challenge.  But totally doable, so don’t fret.

The way I approached visiting the Amalfi Coast was to allow an Italian to do the driving and to keep my eyes and mouth shut when those carefree moments arise.  You can do it on your own, of course, but honestly, fluffy or not the roads aren’t for the faint of heart.  BIG, HUGE busses drive roads barely wide enough for themselves – and you’re meant to drive opposite them.  At times all traffic must stop so a mega-bus can clear a hairpin turn.  I’d have to keep a pound of antacids in my pocket if I were to drive these roads on my own… but you choose.

I see your eyes glinting… You’re dreaming of doing it alone in a black convertible wearing white gloves with a scarf over your hair and big Audrey Hepburn sunglasses,  aren’t you?  You want to yell “Ciao” out the car to cute Italian men on the side of the road on your way to your seaside villa ala Ms. Sophia Loren… ahh, I feel ya.  Again, you chose.

I went the conservative route and took an organized tour.  However, I didn’t want to do the big bus deal, so we booked a small van out of Sorrento where we had rented an Airbnb.  It was our very Italian popped-collar driver and only six of us.  The plan was to visit Posatani, Amalfi and Ravello along the coast and stopping for lunch just outside of Ravello.  We were first to get picked up, which I think was very lucky because the driver was able to put me, the super fluff,  in the ideal seat behind him.  I had my own door, wasn’t going to squish anyone and didn’t have to crawl into the way back.  However, don’t get me wrong, had he wanted me to crawl, I would have crawled.  That is a big rule of thumb with me and traveling – I don’t expect anyone to accommodate me because they have to, but only if they can.  If I cannot be accommodated, I don’t blame the tour operator, ever.  In this case, I was very lucky and it all worked like a charm!

Those views… holy macaroons.  It was a glorious morning on the way down to Positano, and like I mentioned,  the drive was a bit hair raising.  However, with the crazy narrow roads you get to see towns really close up and the way these people live.  We stopped along the way to get some pictures and buy some lemons literally the size of bowling balls.  Once in Positano, our driver dropped us off at the top of the hill and gave us our return time of about an hour.  Yes, the top of the hill.  Now,  I could  have just wandered near by shops and drank in the views at a cafe over a coffee, but damnit, I wasn’t leaving Positano without a picture from the beach.  Alllll the way down the hill with goodness knows how many steps between where I was and the bottom. 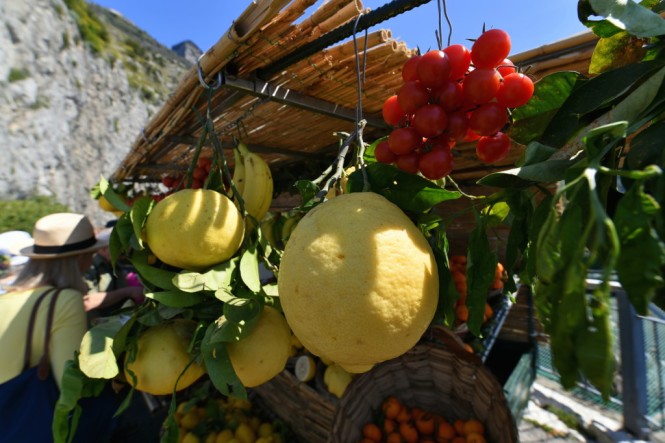 So, down I went.  Along tons of adorable shops just opening up for the day, past sleepy cats and under vine-laden pergolas to the bottom. The steps were plentiful and narrow, so,  very easy to navigate your way down. On the way, I saw men delivering huge beds down the steps by hand cart, since of course, there are no roads for delivery trucks. Just steps. A logistical nightmare soon forgotten when you get to live and work in one of the most amazingly beautiful places on earth, ya know? I didn’t make any stops on the way down, since I knew it was going to be, shall I say, GLARINGLY NECESSARY to make many stops on the way back up. Especially obvious as even the fluff-free people walking past me up the hill were huffing and a-puffing.

As you can imagine, getting down to the beach afforded those iconic views of the buildings dotting the sides of the hills – almost like a painting.  Like lava flows down a mountain, the buildings look as though they are spilling downwards – narrow at the top and wider as you get closer to the beach.   Since it was still early morning,  I was lucky enough to be one of the only people on the beach.  I snapped my pictures and took it all in… knowing my ascent back up the mountain would be more time consuming than my  descent.

Indeed, the trip back up was difficult.  I stopped often to catch my breath, masking my breaks as picture stops.  I took my longest rest inside a beautiful church, as churches always seem to be pleasantly cool and quiet.  When I made it back to the top, I found a shady bench to finish recovering and utilized my trusty hand fan and cold water in my hydroflask to bring me back to life.  I did find myself to be quite drenched with sweat but by the time I got back in the van to head out to Amalfi, I was cool and back to normal.  I would definitely recommend Positano for an extended stay and was very regretful I only had a short period of time.

I’d give Positano a PSG Rating of 5-6

Here is a hilarious picture of one of my fake photo op stops on the way back up the mountain.  Those who know me will be able to see the flared nostrils  and red coloring indicating how hard I was breathing and at the same time pretending not to be breathing so heavy.  Such a nerd. 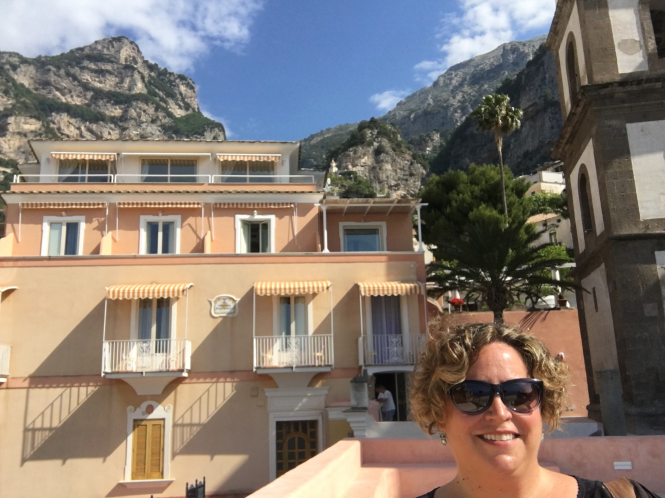 Once we arrived in the famed town of Amalfi, we really felt the weight of the impending summer.  The town was swamped with tourists and our van added to the number of visitors.  Luckily, our driver is a savvy local and knew exactly where to drop us off and again we had about an hour to explore the town at our leisure.  Amalfi is much larger than Positano and it differs because you start at the bottom of the hill at the beach and work your way up into town.  Amalfi felt much more lived in than Positano and had a bit more grit to it.  Since town was so busy, we spent a bit more time down by the water than exploring the sites.

Amalfi gets a PSG Rating of 4-5

Ravello turned out to be the least commercial of all of our stops and therefore the most pleasant to walk around.  From where we were dropped off, while there were some ups and downs, it was by far the flattest place we visited that day.  I really enjoyed shopping here, which is rare for me, typically I don’t enjoy browsing tourist shops since I hate to be interrupted while looking around by eager salespeople.  But,  I felt comfortable here and could definitely see myself returning.  Gardens and views were amazing from almost everywhere in town and there were several outdoor cafes for taking in the breezes and sights.

One of the most memorable parts was discovering the single most delicious gelato I’ve ever had in my life.  We stopped on a whim at Baffone Gelataria Artigianale and split a cone of their black cherry gelato.  Five months later, we are still buying every cherry ice cream and gelato we can find trying to duplicate it’s amazingness.  Sadly, I don’t think it’ll be possible since it was the cherriest of cherry flavor swirled with the most warm vanilla flavor possible…  One of those culinary delights that you think about for the rest of your days.

For sure Ravello was the most accessible of the towns we visited along the Amalfi Coast, therefore I’d give it a PSG Rating of 3-5.

Our trip back, we took inland highways which was obviously less idyllic – but not as nerve wracking to the heart.  Overall, I found the Amalfi Coast to be as beautiful up close as it is in the pictures,  and would definitely return for longer stays along the coast.  This trip was definitely a perfect first taste of the area and very educational as to how and where I’d do it on a return visit.

Traveling in southern Italy is a double edged sword – time of year wise.  You don’t want to go when there are scores and scores of visitors – yet there is little point in going if the weather is too cool to enjoy.  Regardless of how you do it, though, this is definitely a region worth exploring.  Given enough time and determination you can do any of it.

Don’t forget to visit Plus Sized in a Bathing Suit for ideas on the perfect suit to lounge around a beautiful Amalfi Coast beach in . 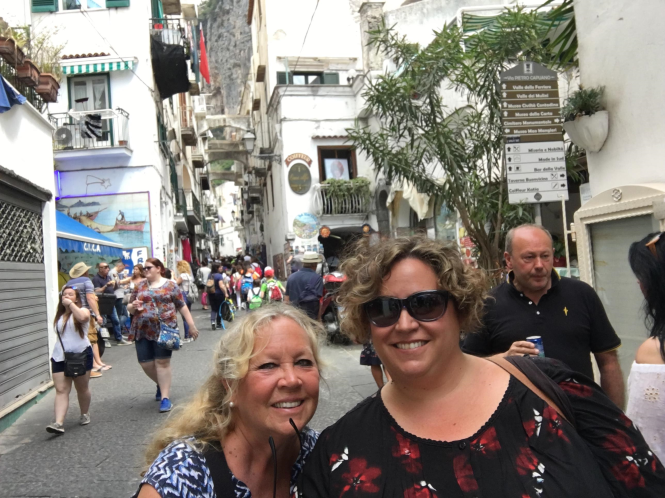